Born just north of Frankfurt Germany, patriarch J. Fred Schmidt journeyed to America and settled in south Columbus in the early 1880’s. Opening the J. Fred Schmidt Meat Packing House in 1886 in the heart of German Village, Schmidt’s became Central Ohio’s most well known name in meats and is to this day sold in leading grocery stores around the country.

In addition to running a thriving packing house business through the great depression, J. Fred’s son George L. Schmidt, was a huge sports enthusiast. In 1938, he became the majority stockholder of one of Columbus’ first professional football teams, the Columbus Bullies. 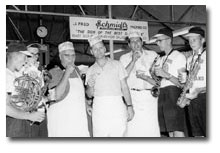 Schmidt’s first venture into the restaurant / concession business was in 1914, when George L. Schmidt opened a stand at the Ohio State Fair. Today, the Schmidt’s food booth is the oldest food concessionaire at the state fair and is still amongst the most popular. 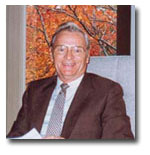 J. Fred’s grandson, George F. Schmidt, opened the company’s first restaurant in July of 1967 just around the corner from his grandfathers’ meat packing plant in German Village. Using meat recipes from the packing days and dessert recipes from the German ladies hired to run the kitchen, Schmidt’s Sausage Haus became an instant success. Schmidt’s is still a landmark eatery in Central Ohio. 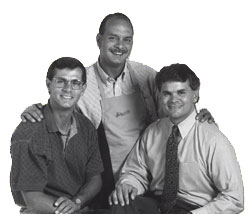 Today, the family tradition of day-to-day operations of this uniquely diverse hospitality company is carried out by the fourth and fifth generations of the Schmidt family. The Schmidt name is recognized throughout central Ohio and the nation as a leader in quality specialty restaurants, catering and unequaled banquet facilities as well as retail sales, fair and festival food services, and sausage trucks. Pictured left to right are John, Geoff and Andrew Schmidt.